We help hungry and homeless people in crisis situations.

Open Your Heart has been targeting donations to help hungry and homeless Minnesotans since 1986.

We fill specific, unmet needs: We help food and shelter providers of all sizes get the things they must have to serve more people.

1 in 10 Minnesotans face hunger. We help food shelves purchase items needed to carry more fresh foods, such as freezers and shelving, and fix structural damage to serve clients in a safer space, such as roof repair.

Homeless students are four times as likely to drop out of school. Our unique Education Fund helps children and youth who are homeless get their GEDs, purchase school supplies and winter clothing, pay for activity fees, and much more so they can participate fully in school.

Providing tangible resources such as these is vital to serving the growing number of people in need and ensures that food and shelter organizations are able to focus their attention on helping people in crisis get back on their feet. We also work to raise awareness of the issues impacting people facing hunger and homelessness and support initiatives that address these complex challenges.

Open Your Heart to the Hungry and Homeless believes that every Minnesotan should be free from hunger and homelessness. We make an impact by partnering with those who serve people in need, growing donor engagement and increasing awareness. 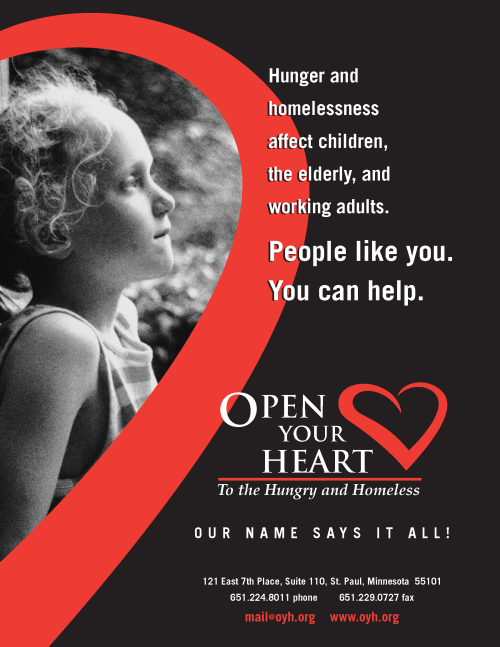 Open Your Heart to the Hungry and Homeless was founded in 1986 by employees of the Minnesota Department of Jobs and Training (now known as the Department of Employment and Economic Development).

The impetus for creating Open Your Heart was a statewide drive by the department to raise money and food for Minnesota’s food shelves during November 1985. Led by Commissioner Joe Samargia, the department organized a statewide drive to raise the public’s awareness of the needs of the local food shelves. Commissioner Samargia enlisted the services of Giovanna D’Agostino (Mama D), a Minneapolis restaurateur known for feeding U of M students in her restaurants, and a local band as part of this public awareness campaign. A steering committee of department employees then developed the food drive into a competition among the department’s offices around the state.

With the success of this department-wide drive, the committee considered the possibility of raising funds year round. The committee thought an annual campaign encouraging donations via payroll deductions would be more effective than regular campaigns throughout the year for food and money.

The idea was supported by Governor Rudy Perpich and his commissioners. His commissioners included Attorney General Mike Hatch, Commissioner of the Department of Commerce, who was the regulator for state employee fundraising at that time.

Department employee Michael Fratto recruited the state-wide presidents of the three largest state employee bargaining units to serve as the incorporating board. These representatives and bargaining units included: H. Glenn Littler, President of the American Federation of State County and Municipal Employees (AFSCME) Council Six, Mike Haney, President of the Minnesota Association of Professional Employees (MAPE); and Gene Aune, President of the Middle Management Association (MMA). This incorporating board, with the help of department staff, produced the necessary documents to incorporate Open Your Heart as a not-for-profit organization and to receive the proper Internal Revenue Service classification.

Open Your Heart was incorporated on April 21, 1986 as a non profit corporation under Minnesota statutes 309 and 317 (Chapter 317 was later repealed and replaced by chapter 317A). The organization has an Internal Revenue Classification of 501(c)(3) and is registered with the Minnesota Attorney General as a Registered Combined Charitable Organization (RCCO).

That fall, Open Your Heart was given permission to pass out pledge cards in all state agencies and the University of Minnesota. This first full campaign raised $221,489. As a result, the Board made 19 grants totaling $150,000.

Up until this point, there was no central location to complete the work of the organization. The entire operation of Open Your Heart was conducted by its volunteer Board of Directors within their individual work spaces. In 1989, and in anticipation of a change in the Governor’s Office, office space was rented in Metro Square to house Open Your Heart. Metro Square had a large number of state employees working in it already and was only two blocks away from the Department of Jobs and Training. The office provided an air of legitimacy for Open Your Heart and also provided space to consolidate important files and materials needed to support the organization.

As a result of the growth and success, an Executive Director was hired. This position worked to create a real office presence and helped relieve the Board of many of its duties. The office has since expanded to include an Office Manager.

Open Your Heart to the Hungry and Homeless now participates in many workplace giving campaigns statewide, and solicits donations directly through the organization’s website.